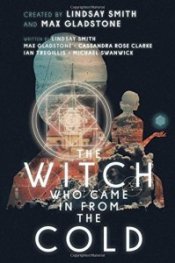 The Witch Who Came in from the Cold takes place in Prague, between January 18 and March 2 in the year 1970. Prague (now the capital of the Czech Republic) is in 1970 the capital of the Czechoslovak Socialist Republic, a nation within the ambit of Soviet Russia’s sphere of influence. The city’s dark and wintry atmosphere, as well as its age and character, are deftly evoked within the pages of the serial. So is its sense as contested territory, a field for not-quite-open war – and this same sense is evoked within the lives of each of the characters. Prague in 1970 is a place where CIA agents and KGB officers may frequent the same cafes and the same diplomatic soirées, while attempting to recruit their various local pawns.

Alongside the CIA and the KGB – and among them – are agents of two warring magical factions, the Ice and the Flame. The Ice and the Flame are vying for control of elemental Hosts – according to members of the Ice, the Flame want them in order to destroy the world.

— from Liz Bourke’s  review of  The Witch Who Came in from the Cold, Locus