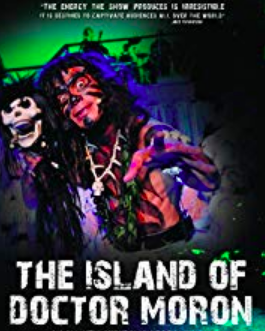 As part of the fringe, there’s a screening of this film at 6:30pm Monday, Feb 25th at the mercury Cinema.

Edwyna and Douggie are shipwrecked on a mysterious island. They are then captured by natives and sold to mad doctor who want s to use them as experimental subjects.

This powerhouse rock musical is driven by 21 original songs, wild dancing and characters you’ll never forget. Come along and meet the creators, director and producers of this amazing Aussie musical. One screening only.
See you at The Mercury.
Chris Dockrill has been writing, directing, teaching and producing theatre for over 30 years. His scripts have appeared in many collections published by major authors both in Australia and, in translation, across Europe. He has written 5 rock musicals, collaborating with his wife, Lyn, as composer. The production of The Island of Doctor Moron is a unique achievement as it is the first and only film of its type to have been produced in Australia to date. It has now screened in many countries around the world and is part of the National Film and Sound Archives of Australia. His writings range from the deeply serious to the outrageously escapist as is this wonderful film.