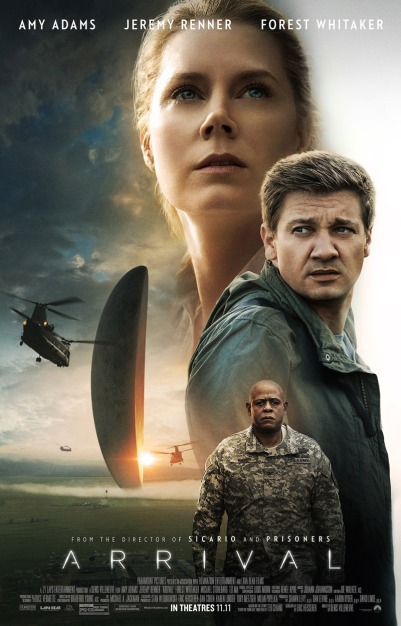 The new SF film by Denis Villeneuve is an adaptation of Ted Chiang’s Award winning novella,  Story of Your Life (winner of the Nebula and Sturgeon, shortlisted for the Tiptree).

It’s a First Contact situation, with  Amy Adams and Jeremy Renner playing  a linguist and a physicist whose specialties are called upon when aliens land all over Earth and we try to find a way to communicate with the visitors.

In the novella, the linguist, Louise Banks, describes the complexity of the alien (named Heptapods) written language:
The heptapods didn’t write a sentence one semagram at a time; they built it out of strokes irrespective of individual semagrams. I had seen a similarly high degree of integration before in calligraphic designs, particularly those employing the Arabic alphabet. But those designs had required careful planning by expert calligraphers. No one could lay out such an intricate design at the speed needed for holding a conversation. At least, no human could.

Here’s an excerpt from an interview with Ted Chiang by Meghan McCarron (full interview in the Electric lit site):
Film really is an alien language. Or at least it’s a language that I have some fluency in as a listener, but one that I don’t speak at all. I’ve always been aware of this at some level, but I was definitely reminded of it when I was first approached about the adaptation of “Story of Your Life,” because it’s not a story that I would have ever pitched to be made into a film. And this ties in with what we were saying about how deeply the written word is embedded in our consciousnesses. Because when a story idea crystallizes in my mind, what I’m thinking about are sentences. I assume that if I were a screenwriter, I’d be picturing scenes, and it makes me wonder about how deep are the differences between these two modes of storytelling.