While I enjoyed The Witcher TV series, it was hard to follow because of the three separate timelines, unflagged flashbacks and non-linear series, Here’s what the showrunner said about series one:

…what I misunderstood was what everyone was looking for in their entertainment. For me, and this has been a huge lesson on this project, I love to be challenged when I’m watching TV. I love to not understand everything in the beginning, and to know that if I keep watching and keep paying attention that the puzzle pieces will start to fall into place. Not everyone, it turned out, wants to do that. It was interesting talking to fans who said, “I didn’t have any idea what was happening in the timelines until episode four.” And I’m like, “Yes! Exactly. That’s when it should have hit home.” And to me, that was like a huge success. And yet, that viewer felt like they wanted to understand what was going on from episode one.

— from an interview in Vulture with the showrunner of The Witcher,
Lauren Schmidt Hissrich. Read the full interview for an idea what’s coming in series 2

Critical Mass resumes for 2020 at 7pm Wednesday Feb 5th.
Our speaker is Beata, who will talk on Asian Scifi, fantasy and related matters

This evening I will present my first and probably somewhat random foray into scifi and fantasy stuff coming out of Asia – beyond Stein;s Gate and Three-Body Problem. This is a vast and interesting space and my talk will present but a few snapshots of popular culture, internet, film and books. As you dig, you discover. There will be sure more to come in future.
— Beata

It’s a sensual, remarkably visual ride, vigorous with displays of conceptual imagination and humour. There’s a man wearing a “chocolate brown terrycloth tactical bathrobe”; there’s a bar called “3.7-sigma”; there’s a shopping bag that returns itself to the shop after you’ve used it, by origami-ing itself into a butterfly. Want to eat breakfast at “The Denisovan Embassy”? The name is only Gibson’s opening bid: before you’ve been there half a page, Lowbeer herself arrives in full-sail steampunk, wearing “a Victorian lady’s riding habit, but reimagined as having been cut from nylon aviator jackets” and carrying a top hat. Almost all of the author’s interests, from the political aesthetics of technology to the technology of political fashion, are collected in this near-Moorcockian curation of images. Gibson’s ability to simultaneously destabilise and entertain is both celebrated and used to the full. But it’s also linked firmly to his signature themes, the prime one here, of course, being agency.

from M John Harrison’s review of Agency in The Guardian 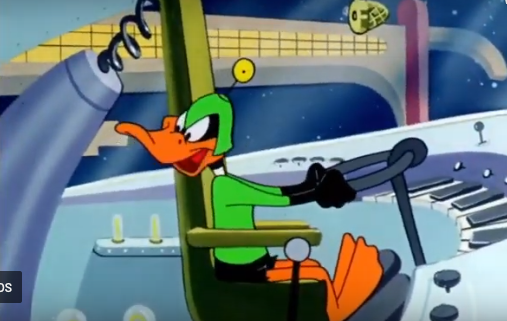 In a universe of towers that soar and platforms that project precariously out into space (in brilliant background designs by Philip De Guard), where electric eyes trigger doors opening up on even bigger electric eyes, Jones finds opportunities for customary slapstick (does Daffy get repeatedly blasted and disintegrated? Of course!), subversions of SF concepts (who knew rocket ships had reverse gears?), and a few lashings of Cold War anxiety as Daffy’s feud with Marvin over the highly coveted Planet X (last repository of Illudium Phosdex, “the shaving cream atom”) escalates eventually to planetary annihilation.

The Philip K. Dick European Science Fiction Film Festival has announced the award winners for its sixth annual event. The gathering saluted the legacy of novelist Philip K. Dick with a slate of independent science fiction films, six of which were honored for their cinematic excellence. The festival was held October 25-26 in Lille, France and October 31-November 1 in Cologne, Germany.

Synopsis: A fanatic subjects his niece, whose faith wavers, to a baptism in order to restore her faith and ultimately save her from an impending doomsday flood.

Synopsis: A clinical psychiatrist becomes obsessed with her mysterious new patient’s artwork and realizes he possesses a curious gift.

Synopsis: This documentary follows philosopher Aldous Huxley when he visited the recently built and technologically advanced Billingham Manufacturing Plant in 1929. He left inspired and his novel “Brave New World” was born from what he saw combined with his visioned future.

Synopsis: A doctor experimenting on fruit flies is developing a substance that can dramatically increase activity in brain cells. After a series of failures, one fruit fly finally has a huge reaction. Its intellect has become mutated. 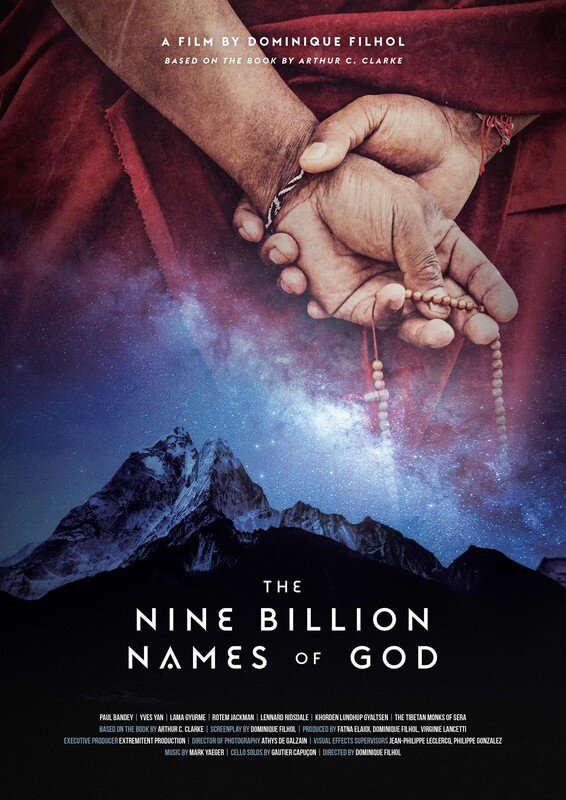 Synopsis: In New York 1957, a Tibetan monk rents an automatic sequence computer. The monks seek to list all of the names of God. They hire two Westerners to install and program the machine in Tibet. A short film is based on the book by Arthur C. Clarke.

Synopsis: A young woman faces a supernatural existential crisis and must overcome her fears to unlock her power within. 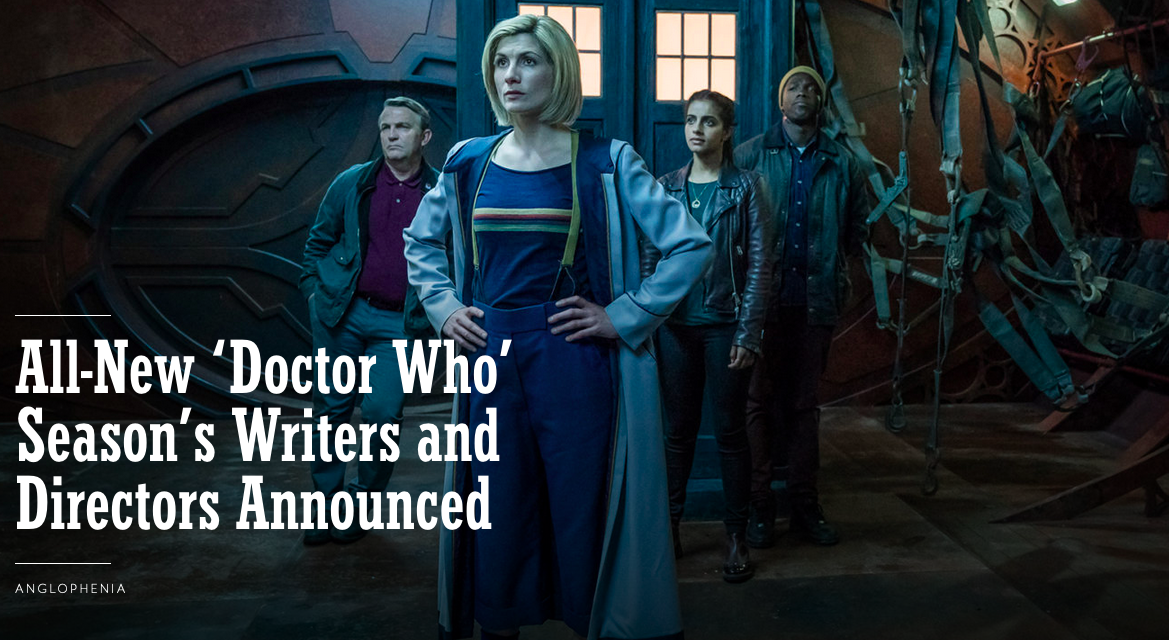 With the Thirteenth Doctor, played by Jodie Whittaker, and her friends landing back on our screens early next year, BBC America has announced an exciting host of new directors as well as both new and returning writers for the next season of Doctor Who.

Three new writers have jumped on board the TARDIS for the upcoming season: Nina Metivier, Maxine Alderton and Charlene James.

Showrunner Chris Chibnall said: “We’re thrilled that Doctor Who continues to attract some of the most the most exciting and dynamic talent working in television. Along with our returning faces, we’re excited to welcome new members to the Doctor Who family. The Doctor Who team is crammed with British television’s brightest writers and directors: we’ve adored working with them, and can’t wait to show you the explosive stuff they’ve created!” 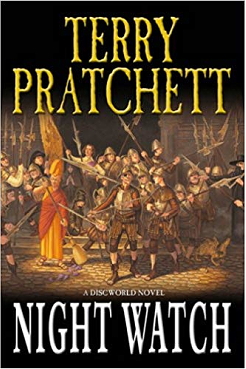 The Watch has found its Lord Vetinari! BBC America has announced the latest batch of casting updates for its Terry Pratchett adaptation, and Anna Chancellor will be playing the Lord Patrician of Ankh-Morpork.

In a statement to BBC America, Chancellor gave a preview of her take on the character: “With the combining characteristics of Dracula and Elvis – Lord Vetinari has sprung to life in the most alarmingly joyful way,” she said.

Lord Vetinari isn’t the only character with gender-neutral casting. Chancellor will  also be joined by Ingrid Oliver (Doctor Who) as Doctor Cruces, head of the Assassins Guild, Ruth Madeley (The Rook) as wily merchant Claude Maximillian Overton Transpire Dibbler aka Cut-Me-Own-Throat Dibbler aka Throat, and Bianca Simone Mannie (Homeland) as Lupine Wonse, the ambitious secretary to Lord Vetinari.  Meanwhile, James Fleet (Outlander) will take on the role of the Archchancellor, head of the Unseen University school for wizards, and Hakeem Kae-Kazim (Dynasty) will play Vimes’ mentor Captain John Keel.

One of the most compelling themes in Phillip Pullman’s His Dark Materials series is the way in which he represents childhood as both a sacred time and a space for profound frustration at the complexities of the adult world. It’s one of the most unifying themes across all of children’s literature, and a difficult trick to pull off effectively. It is especially difficult to strike this balance in children’s fantasy, since the magical elements of the world can sometimes serve as deus ex machinae that make the adult world literally less complex.

— Tyler Dean, “Childhood and the Burden of Knowledge” at  tor.com

As is our custom, the december Critical Mass will be a dinner gathering.
We’re looking at meeting at 6pm Wednesday, December 4th at madré, the fancy new pizza place on Gilbert St.

It’s a popular venue, so if you’re interested in joining us, please send roman an email, so that we can book for the appropriate numbers.

In the spirit of xmas, we ask you to bring along a book you think should be better known, along with a brief reason why you’d recommend it.

Looking for a christmas present? This bundle avaialble for the next week:

Most people misunderstand the mystery genre. They expect Agatha Christie type stories—you know, bodies in the library and implausible murders and lots of puzzles. And while that is a form of mystery (cozy), it is not the entire genre.

Really, if we were going to name the genre correctly, we would call it the crime genre. But if we do that, then readers expect true crime, which is a nonfiction genre.

So we’re stuck with the inadequate word “mystery” when we mean “crime.” At least the word “historical” works for us. Although it covers a broad scope. At least in this bundle.

And, frankly, I cheated when I put Quoth The Raven in this bundle, because the stories aren’t historical: they’re contemporary. But they’re here for two reasons: First, many scholars believe Edgar Allen Poe invented the mystery genre. Or, at least, detective fiction. (Because if you say he invented the genre, you’d be ignoring half of Shakespeare. But detective fiction? Yeah, you might have a point there.)

The second reason is that this anthology is reimagined Poe, so the stories have a distinct 19th century flavor because of their subject matter. (Besides, they might give you a good excuse to revisit Poe’s short stories. They’re stunning.)